The Bach Genealogy. Does It Start in Wechmar? Was It in 1619? 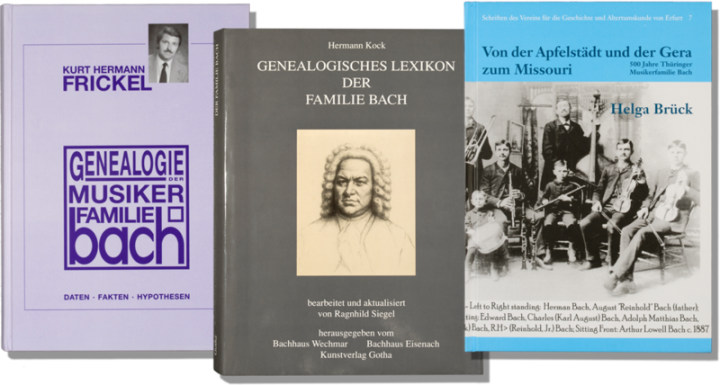 The Bach genealogy is a challenge and has ever been: There are three considerable book works of Bach scientists! However, they are already antiquated. One reason is that the publication dates back some years. And so there is a constant change: In the Bach genealogy. Why do I consider this part "promotion"? Because there is a tiny, really tiny number of copies of the book of Helga Brück left, and we bought them all. So, because you might consider this mention here as advertisement, we definitely want to play by the rules and let you know about.

The Bach Genealogy in a Constant Change

The Bach genealogy is more than complicated. It is highly complicated. And only few managed to approach it closer – the completeness. Ready it's probably not for a long time to come, because it is changing in every aspect. Very early, that is in the years around 1600. And as well very late, which is today. The youngest member of the family is younger than one year old. And it changes in the affiliation of whole branches. The change of the technology allows new options in the Bach genealogy: Research, which was possible back then only with long and far trips – for instance to London, Rotterdam and Texas in the USA – today it's possible online. Many documents are scanned meanwhile and provided publicly on the internet. Finally, if you too know what you are looking for and you know where, than you approach new secrets. To discover them, that is what two amateur researchers Renate and Peter Bach, Jr. have made their passion. Meanwhile, they collected the largest and most correct Bach genealogy. However, it is still not well arranged and for a long time not ready to be presented to perfection. But such level would not have been accomplishable without the basis by the work and research of the scientists Frickel, Kraft and Brück as well as Kock and Siegel.

Crystal clear: the Bach genealogy. A total of over 500 years! Crystal clear as well: Nothing related to Bach is uncomplicated.

Here now – on this website about the Bach place of Wechmar – the Bach genealogy is supposed just to be fun and is presented in broad view. However, if you now are interested, may be even excited, than there is another place on the internet, where you find a whole internet portal about these exquisite musicians, the Bachs. If you are interested in the Bach place of Wechmar now and here and today – so the Bach genealogy is not that important – than you are perfect here.

The Bach genealogy gets more and more complicating from here, and that is even true earlier than Veit. Where he came from and who his siblings were and his life path lead him, that is what Bach biographers, Bach scientists and Bach genealogists fight for more than 250 years. Sure, before Johann Sebastian Bach's death almost nobody was interested in that. However, since this time, people wanted to learn about the origin of this family. 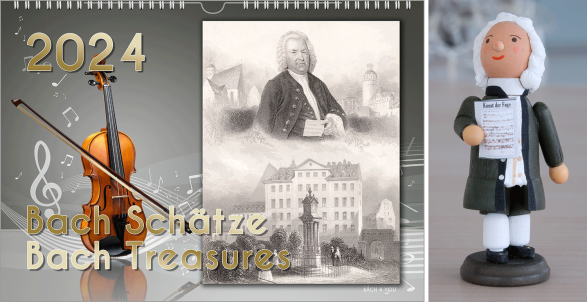 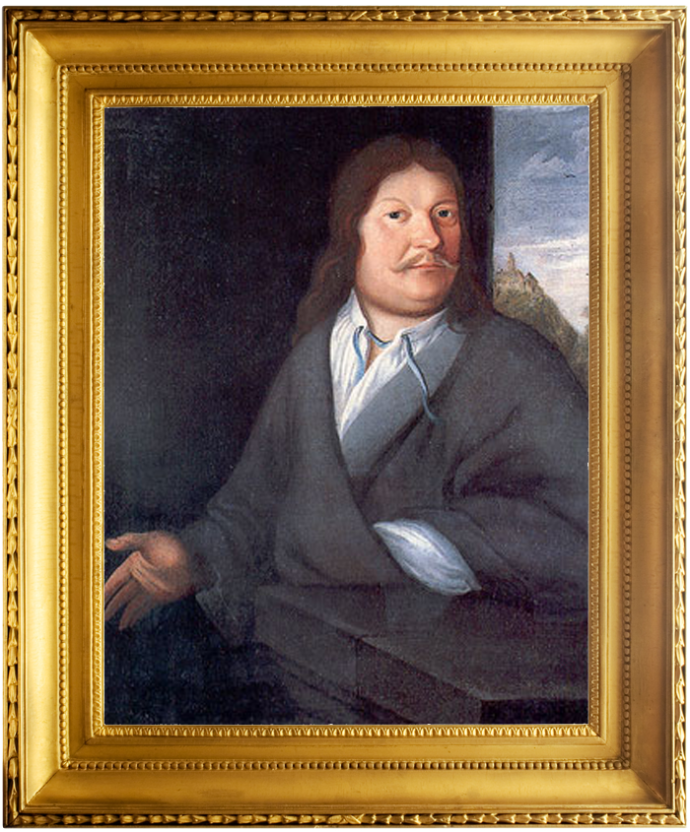 It's in the broader era of Johann Ambrosius Bach – the father of Johann Sebastian Bach – when the Bach genealogy finally got sort of clearer. At last regarding the essential data and the important persons. By the way: Here in the photo you do not only see the father of Johann Sebastian Bach, but the uncle of the Thomas Cantor as well. He was looking just like his twin brother. He was so looking alike, that just the spouses of both knew who is who, and that was only possible by checking on their clothes. This is how exciting Bach genealogy can be.

Is this Bach Genealogy Really Complicated?

The Bach genealogy is highly complicated. One reason is, because many members of this family married among themselves. Most prominent example is Johann Sebastian Bach, who married his second cousin Maria Barbara Bach. Plus things get complicated as the first names are the same often times. Star of these first names is "Johann Christoph": 17 family members carried this first name. Bach brothers married sisters with the same name of a different family and later Bachs even married the widows of died Bachs. Nobody thought about these poor genealogists, what that meant for their research. Plus there are burnt church records, lost records and stuff that has never been recorded. And some documents are "still out there somewhere" – but not discovered until today.

Somebody who is approaching the Bach genealogy for the first time and tries to get through the data with help of the internet or on the basis of biographies, stumbles too over such curiosities, like the Berlin Bach is the Hamburg Bach as one person and that is true as well for the Milan Bach who too is the London Bach. Of course some Bachs just disappeared from the genealogical screen and that too makes the research a challenge. A challenge of such dimension, that one branch of the family of musicians hasn't been discovered as late as some years ago by Helga Brück, a Bach genealogy specialist and a Bach author.

Today Renate and Peter Bach, Jr. are ambitioned to discover more secrets around the family of musicians. With that they build on the Bach genealogists of considerable level, whose works are acknowledged in the Bach science, honored with the Federal Cross of Merit or honored with the title of a professor. These are the life works of the researcher Kurt Herrmann Frickel, the scientific work of Professor Kraft from Eisenach, the authors Koch and Siegel and the accomplishment of the mentioned Bach author Helga Brück, who died in October 2013. 95, better 98 percent of this Bach genealogy is accomplished. The remaining two to five percent: to find those, this is our passion. Plus to arrange them. 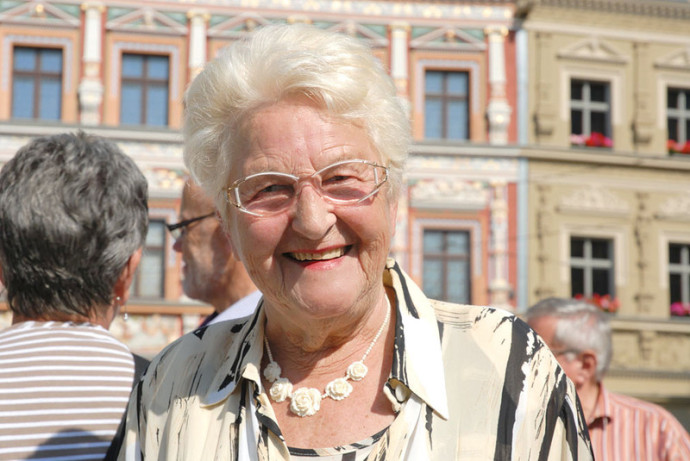 Bach author and Bach genealogist Helga Brück from Erfurt. This photo is taken in 2012. The video about the Bach city of Erfurt with her produced in the same time frame. She completed the Bach genealogy essentially. She died surprisingly in 2013 and we miss her. Here is the link to the video. Just scroll a little down that page. 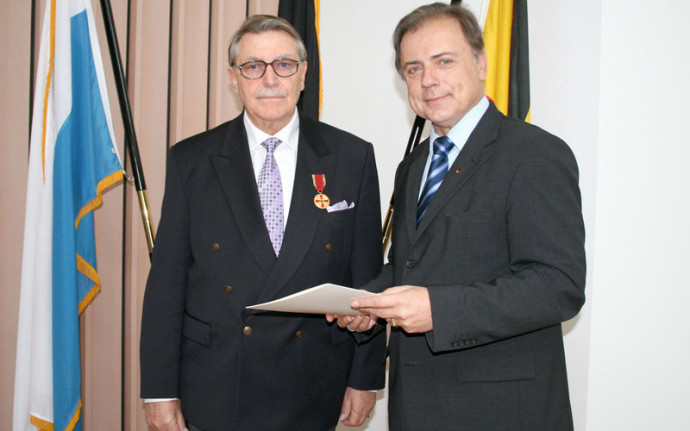 Kurt Herrmann Frickel on the left from Niederwerrn is honored for his year long work with the Bach genealogy with the Medal of Merit of the Federal Republic of Germany by the district chief executive Harald Leitherer. 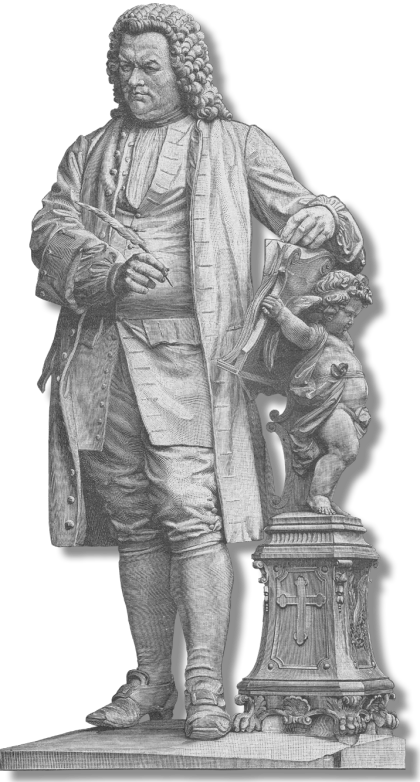 The fact, that Johann Sebastian Bach married twice and had a total of 20 children with two wives, Maria Barbara and Anna Magdalena, doesn't make the Bach genealogy easier – but at least it doesn't complicate the follow-up of this generation for the research significantly. Or isn't that true at all? The protection of private data plays a big role. You just don't get easily to the youngest generations of this family of musicians – because how could you find them? Some few are happy to provide their personal data – of course only the data which is important for the Bach genealogy. But some don't like the idea. They are right. Renate and Peter Bach, Jr. try very hard to get this data anyway. In the demand of the Bach genealogy – and promise to handle these sensible data very confidentially. 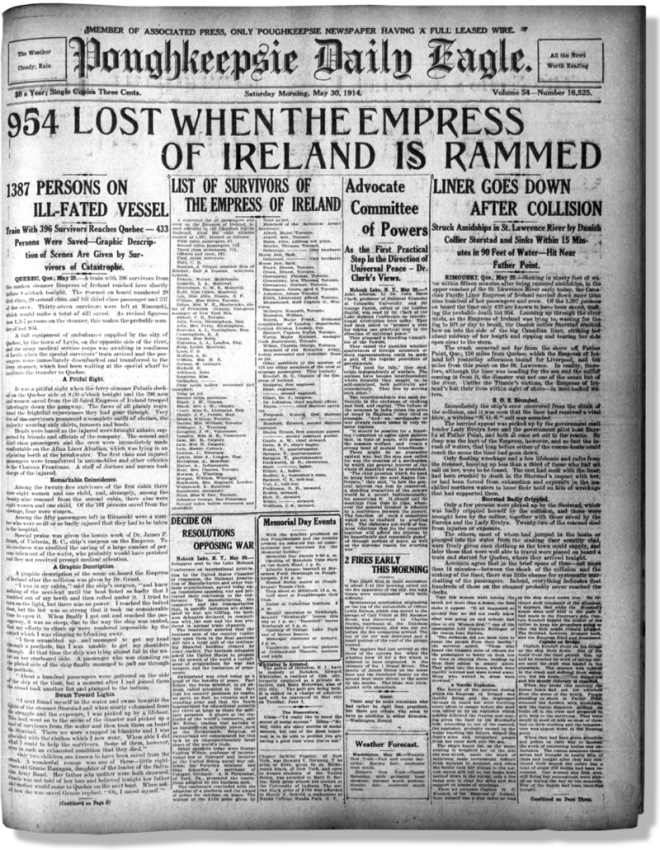 Much more exciting than in Germany is the documentation of the Bach genealogy in the USA. Here Johann August Reinhold Bach was drowning shortly before World War I started and all is documented which he had collected and researched – the American Bach genealogy – had been lost as well. And there was no such thing like photocopies at that time. 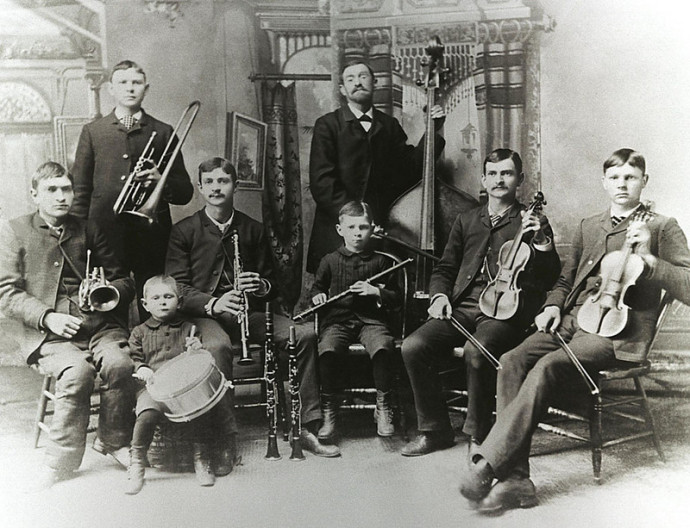 The Bach Band in Rochester, New York, USA: All of these eight gentlemen are Bachs. They alone are a larger family of musicians than some other families of musicians on this earth. In the American section of the Bach genealogy you may observe the musical sense perfectly ... 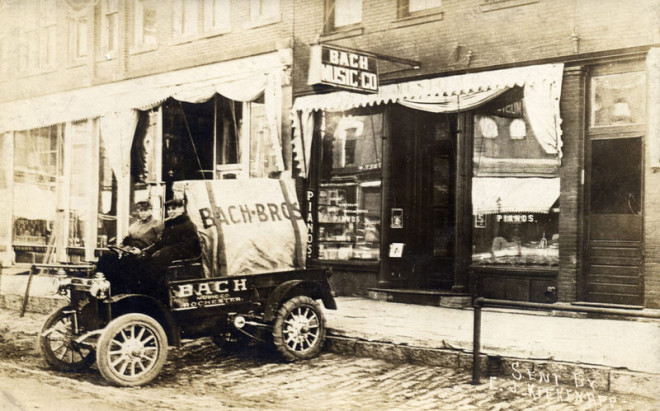 ...and if they didn't play music, they built musical instruments or at least traded them. With those finds and sources in the USA the Bach genealogy actually becomes alive. Und there are really many descendants of this family of musicians of Veit Bach of Wechmar. 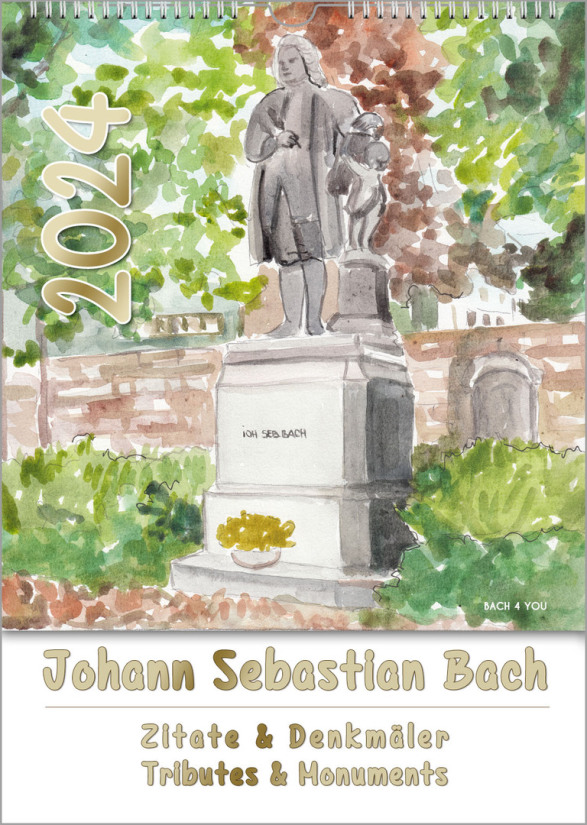 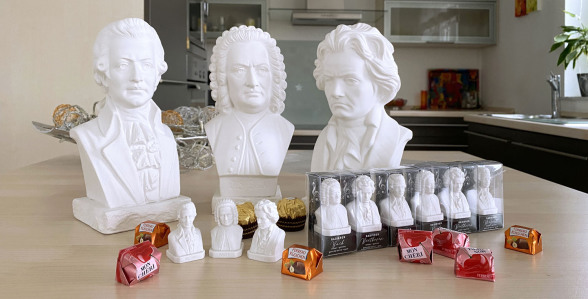 Bach gifts and more Bach gifts ... did you know "Bach 4 You" offers them in 5 Bach shops? Learn more. 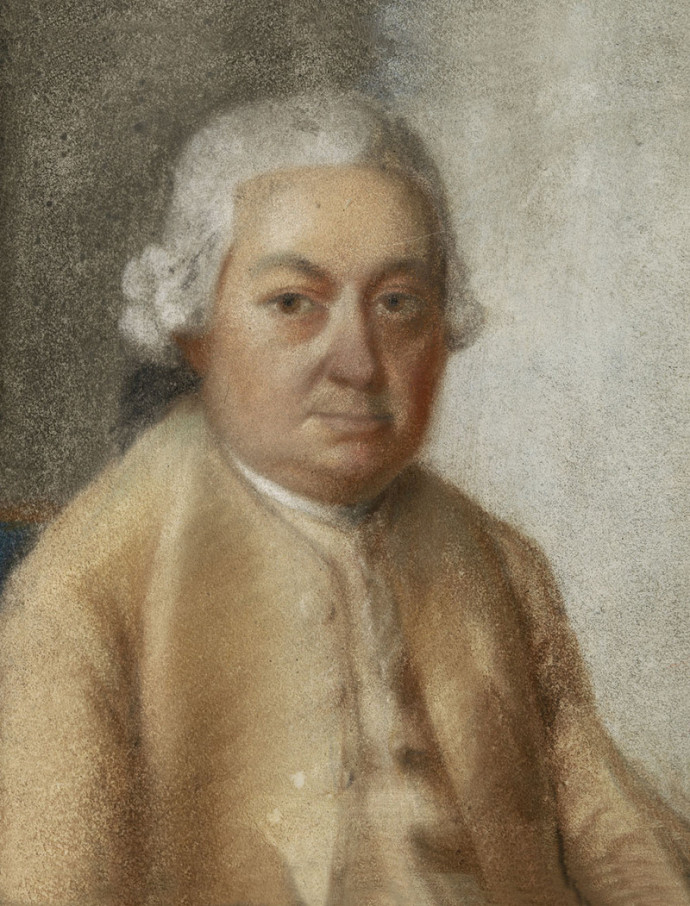 The Bach genealogy would be incomplete if not at least one of the four famous sons of Johann Sebastian Bach wouldn't be introduced here: This is Carl Philipp Emanuel Bach. He is the Berlin Bach. And he is the Hamburg Bach as well. All four sons were more famous at their time as their father. But he caught up powerfully, after 80 years of a broad disinterest in his music. Almost precisely 100 years after the initial performance of the St. Matthew Passion, one of the most famous works of Johann Sebastian Bach, the father of his four famous sons became more and more well-known and his work was valued more constantly. Today he is accepted worldwide as one of the most considerable musicians of all times. The New York Times even voted him number one in 2011. 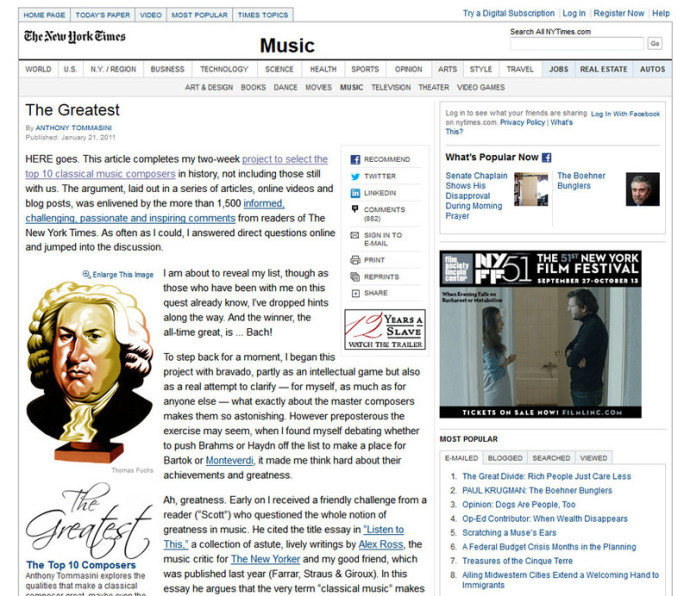 Actually, this article doesn't match to the theme of Bach genealogy, but this is exciting: The New York Times voted Johann Sebastian Bach number one. Here you can click to the whole article.

If I accomplished that ... that is by some means or other, then there is a place to learn more. Actually – much more. There you may surf, research and read for hours – and finally dive into ... into the Bach genealogy, that once started at the Bach place of Wechmar around the year 1600. 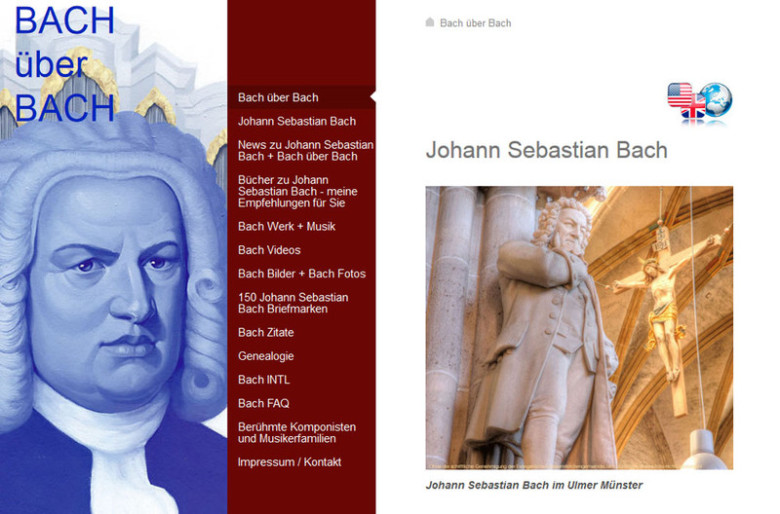 Here on "Bach in Wechmar" you only get a broad overlook. On "Bach on Bach" there are answers regarding Bach, you even didn't even ask. This website "Bach on Bach" is not only about Johann Sebastian Bach, but about the Bach genealogy as well, plus genealogy in general. It's much more detailed than on this website: Some 1,000 pages are offered related to the theme of Johann Sebastian Bach and his family. German and English. With hundreds of Bach videos, pictures and photos and music of Bach. Of course. If you liked this website about the Bach place of Wechmar – than you will probably be excited of "Bach on Bach". If you didn't like this page, please do not click on the link above.

We Get No Commission And We Are Thrilled With Christian Hoske!

Hey, you are still here? Then you have read everything related to the Bach genealogy on this page, experienced all the pictures related to the Bach genealogy? Then you earned some time of relaxation. Just a little. A video – not explicitly on the Bach genealogy – but on the mentioned Mr. Hoske, the German family researcher, might please you. It is four minutes short, with music and narration, and after you watched it,  you know Mr. Hoske a little better. You find even more information here. But ... why is it an ad if we do not get commission? Well, I want to be quite sure that the rule is not that whether I get commission or not, I have to mention that a service or product mentioned is presented in a way that promotes sales. And therefore in doubt ... well, you know it!

The smallest Bach biography and the pipe organ calendar. All music calendars come in 3 sizes. 2022 + 2023. US style + EU style. To the shop.