Wechmar: The First of the Bach Places of the Musical Family of J.S. Bach

Wechmar ... first of all, it should be the Bach village of Wechmar, not the Bach city of Wechmar – but is there such a thing in English like Bach village? So I guess we better rotate between Bach city and Bach place, and you now know that this Bach place Wechmar is extremely tiny compared to real Bach cities like Leipzig, Berlin, Potsdam and Dresden.

The Bach place of Wechmar, in Thuringia, Germany – they call it "Bach Ancestral Community of Wechmar", too, is considered the cradle of the family of musicians around the composer Johann Sebastian Bach. Exactly here, in this community, started what later, much later lead to the largest and most famous family of musicians all over the world. This is how Johann Sebastian Bach called his family. Of course he did it in German, which is the "Ursprung der musicalisch-Bachischen Familie" – but does that make any sense to you? He made this catalogue in the year 1735, when he was 50, and he listed exactly 53 family members, of which almost everybody was a musician. Number 1 was Veit Bach and he mentioned the name of Wechmar. This Wechmar. The Bach place of Wechmar. Or, the offer is still valid, the Bach Ancestral Community of Wechmar. 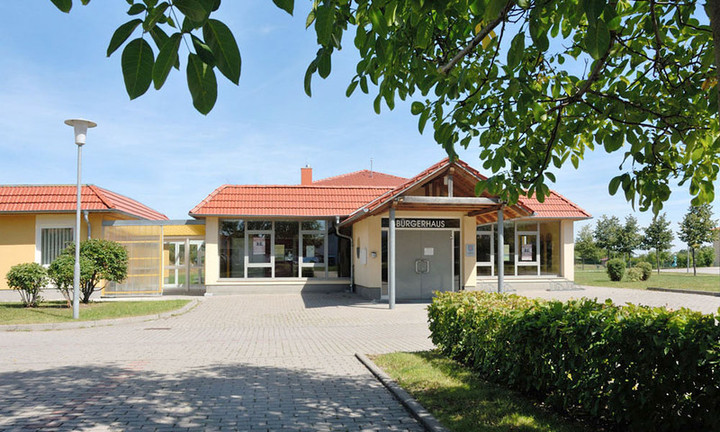 The Bach village of Wechmar is no longer independent today. Wechmar is meanwhile a district of the municipality Drei Gleichen. In the immediate neighborhood of Wechmar is the Bach city of Gotha. 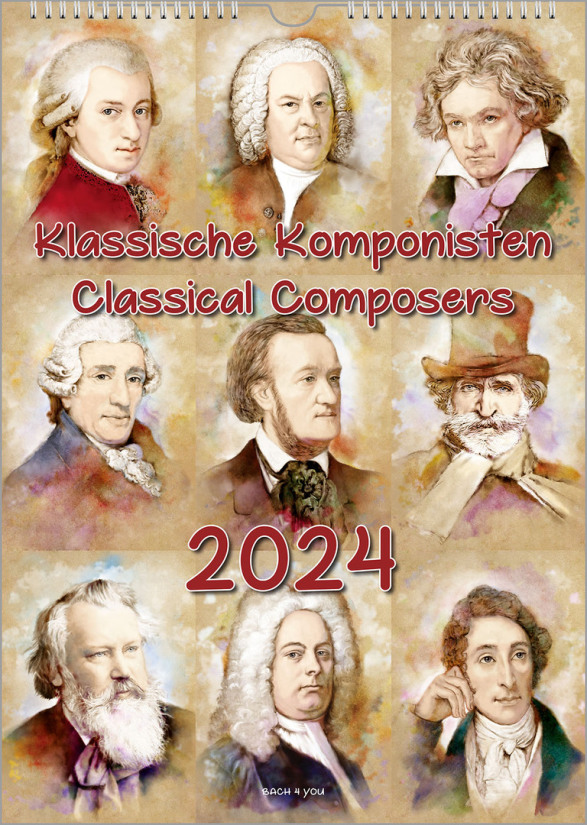 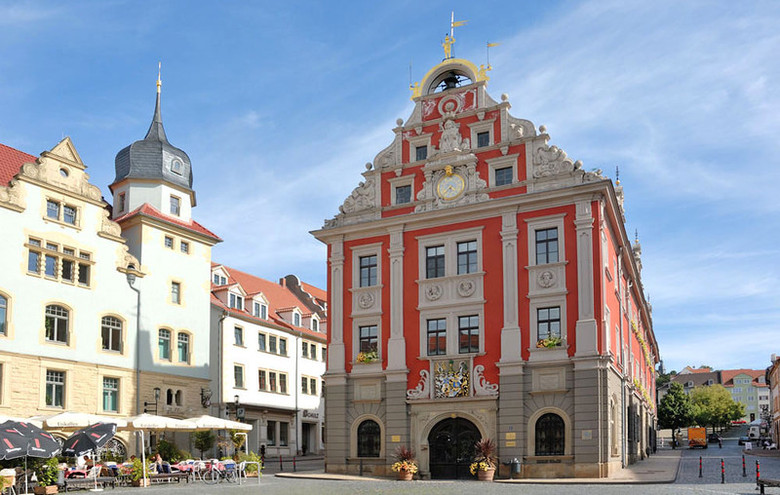 ... so – Wechmar is such a Bach place in the category B. Johann Sebastian Bach has never been there – according to the Bach science – but the Bach village of Wechmar is important. And Wechmar is even more important for the Bach genealogy. If you like, click to this Bach genealog.

Sorry, Dear Güntherslebeners: On This Website It Is Just All about the Bach Place of Wechmar

I apologize to the residents of Günthersleben, that this introduction of the beautiful community is not at all about Günthersleben and only Wechmar – the Bach place of Wechmar – plays the big role here.

On this website about the Bach place of Wechmar it's only about this part of the community, that is to say Wechmar. The story with which this part of the community became a Bach place is adventurous, unusual and rich of personal engagement. There are explicitly three individuals: They are Knut Kreuch, today major of the neighbor town of Gotha. And that is the married couple Renate and Elmar von Kolson, who lives in Wechmar for a decade. All three of them have shown an unusual motivation in keeping the cultural Bach history in Wechmar alive. They have changed the village of Wechmar into the Bach place of Wechmar respectively the "Bach stem place of Wechmar" – you remember, use the term which personally prefer.

From a Bach here, a late “Thank You”!

The Bach place of Wechmar is exciting, like few Bach places in Thuringia, Saxony and Saxony-Anhalt, with Bach locations inside the city limits worth a visit. However – and that is different compared to the other Bach places – all are within five minutes walking distance. Because Wechmar just isn't larger. There you will find the Bach Ancestral Home (... the Bach-Stammhaus), the Veit Bach Mill, the church which is so important for the Bach genealogy, the former schoolhouse, where Bach family members taught and the restaurant and bed and breakfast "Golden Lion", where the grandson of Veit once lived. 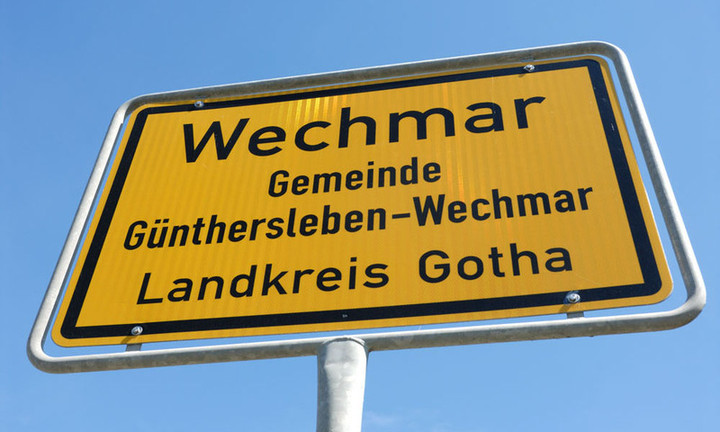 Because we almost don't mention the Günthersleben part of the community on this website about Wechmar, at least we show that it's correct what I tell you about the community. In the meantime, Wechmar and Günthersleben no longer belong together, but Wechmar is now a district of Drei Gleichen. So exactly this picture above is ... correct ... also no longer true.

You Get the Bach Place of Wechmar "For Free"

What do I mean?

Let's assume, you are following Bach's route. Keyword: the Bach cities and the Bach places. Then there is the question; which ones should you visit? And you get to the result very fast, that most of them are located in Thuringia – in a very tight circle.

One Bach city is the Bach city of Ohrdruf. Ohrdruf is so close located next to the Bach place of Wechmar, that you should not skip Wechmar at all. No way! You should take both as they are next door neighborhood, if you are in the homeland of the Bache, how they called the Bach family back then.

Did Veit come from Pressburg in Hungary to Wechmar? No, no, no! Veit never lived in Pressburg, but he did come from Hungary.

Did Veit come from Pressburg in Hungary to Wechmar? No, no, no! Veit never lived in Pressburg, but he did come from Hungary.

Veit Bach is surrounded by genealogical secrets. However: in the Bach genealogy, we talk about the year 1600 – and that is true fifteen years more or less – nothing is fancy. Because records are missing, records of significance! However, there is one particular. Maybe it's the most important of all: the "Ursprung", which is the genesis in English, by Johann Sebastian Bach personally. It is Bach who made the relatively unknown little village in Thuringia the Bach place of Wechmar – I know the Bach-Stammort Wechmar, the Bach Ancestral Home Wechmar.

But what part of is in Hungary? Nothing at all. They don't know whether Veit was born in Wechmar. But they do know, that Veit had to disappear from Hungary. In what Bach called "the sixteenth seculo", the sixteenth century. That is why Veit came from Hungary at the very beginning of the records of Johann Sebastian Bach. However: How Veit Bach got to Hungary, whether he was a Hungarian, or whether the Bachs, back then the Bache, moved to Hungary and back to Thuringia again later, that is absolutely unclear. Just a little.

Dozens of biographies and articles provide a background for the history of Wechmar. It seems to be obvious – to be ahead of a deeper, more intense research on another new website related to the theme – in Wechmar it's for the first time that the Bach family developed into the "Musical-Bachish family". Before that time the Bachs existed – but until this generation music wasn't their cup of tea. 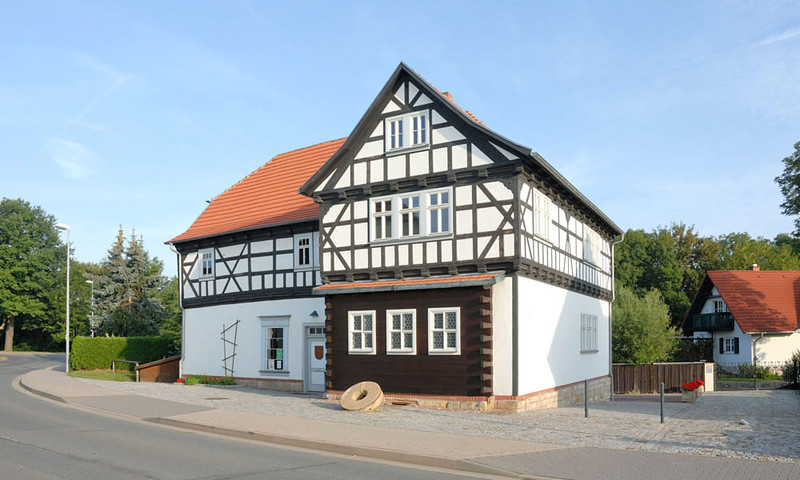 The mill. More precisely: the Veit Bach Mill. Here in the Bach place of Wechmar both Veit Bach and Hans der Spielmann were living and working. 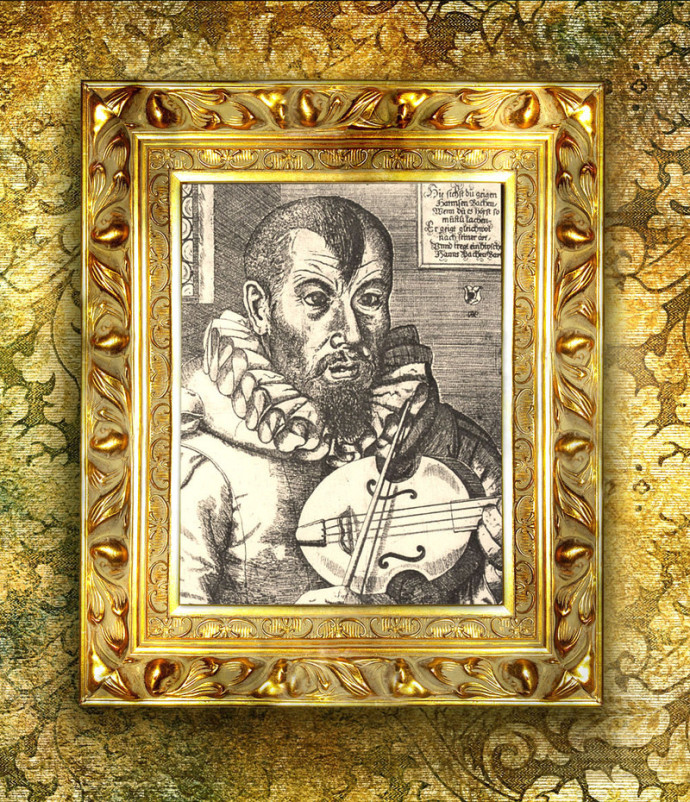 A Visit to the Bach Place of Wechmar, Thuringia Is Really Cool and Rewarding 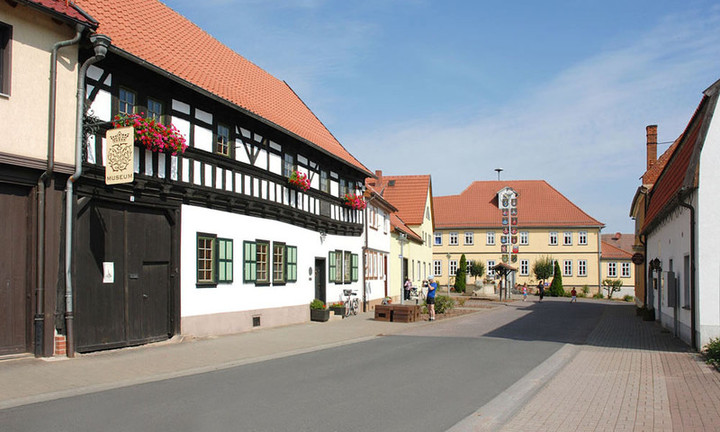 The Bach Ancestral Home (Bach-Stammhaus) in the Bach place of Wechmar. Location 1 and almost a must for everybody, who is interested in this family beyond the music of Johann Sebastian Bach ... 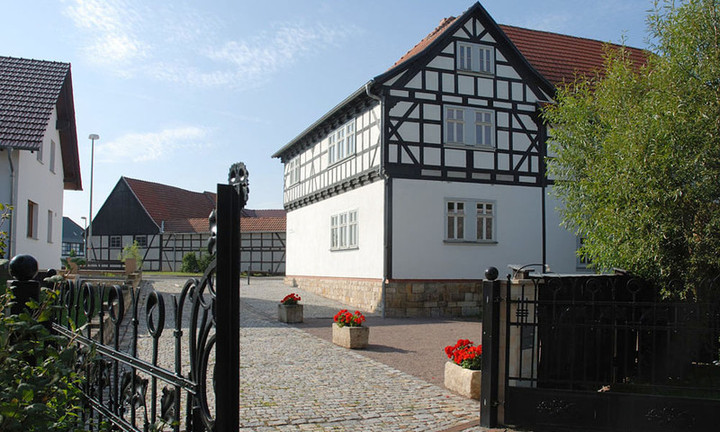 ... and the Veit Bach Mill, which made Wechmar a Bach place of even more significance. The mill was existing a long, long time that is some 400 years. But not before the mill has been almost torn down, they discovered what treasure they almost had destroyed. 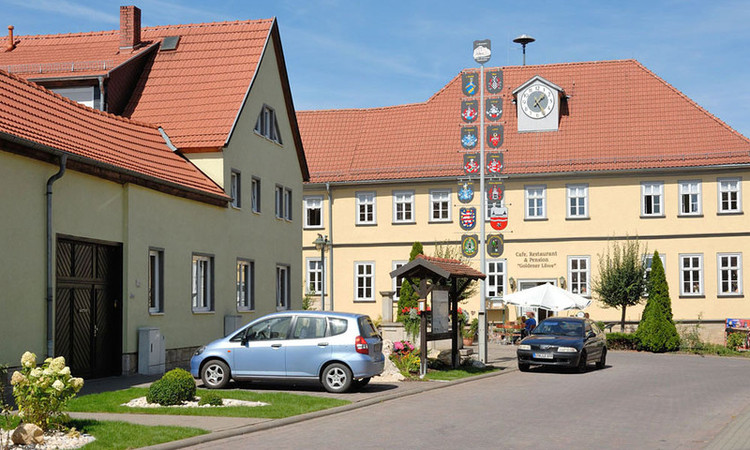 You can't be closer to the Bachs. The "Goldener Löwe", the "Golden Lion", a restaurant and bed and breakfast in the Bach place of Wechmar. Here the grandchild of Veit Bach once was living. 20 seconds to walk is the distance to the Bach Ancestral Home (... Bach-Stammhaus), 60 seconds away is the former school, in which Bache were teaching und 60 seconds away as well is the church and the cemetery, where some Bachs probably are buried. Full 240 seconds away is the Veit Bach Mill. You realize: that is easily to accomplish without a car. The Bach place of Wechmar – they arranged it already in the year 1600 for the nowadays tourism from all over the world. 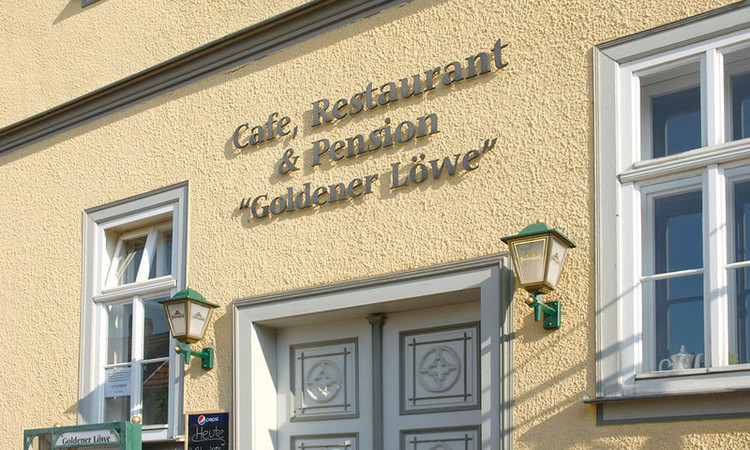 The "Golden Lion" in the Bach place of Wechmar: I was dining there, I was lodging there, and I had the time of my life with Mr. Löffler. About what? OK, guess three times. My judgement: I would choose that place again, any time. It tasted great, I was sleeping like a child, I felt perfect. And I was very close to the back then Bachs.

Where Do You Find More Exciting Stuff About Wechmar, Thuringia, Germany?

Sure, as always you get more related to every theme in the Bach mission - and that is true for the "Bach Place of Günthersleben-Wechmar", too – on Wikipedia. In German, you even find two wikis about this tiny little Bach place. The second German Wikipedia is just about the important little part of that mini city in German. There is more information and some details which are exciting, however it's first less for Bach fans and for those who are interested in Veit Bach, second it's ... in German, sorry folks. Next is a German only website, too, the one about the Bach-Stammhaus in Wechmar – the Bach Ancestral Home in English – however it's in German, too. So from here it would be rewarding to learn some German words, or you keep here, read more and use the Google translation support. There is the official website of the Bach place of Wechmar, however it's not in English. So the best place for you to learn more about this community probably is this Bach website. If you just want to get a first impression, you might hop to this Bach-Stammhaus page on the wechmar-bach.de Website. Explore the pics, ignore the German text. Last, but not least, we want to recommend the Wechmar Homeland Society Website and finally there is the Wechmar Facebook Page ... however both in in German only. The excuse is just the size of this little community.

Of course, I have taken photos there, in the Bach place of Wechmar, however I took a few in Günthersleben too. You now can explore these photos with a click here. In addition, you get – it almost goes without saying – a small and short video about this Bach Ancestral Place Wechmar ... with a click here ... (... plus scroll a little down this page). Plus you may expect a special offer: chose a music work of the master (... after that, your click in the red navigation, and after you clicked yourself there go step by step via the > button): Finally add the photo collection "Wechmar". However ... it has to be this particular order. If you miss it, ... it won't work. Choose a music work first; second, decide for the photo collection.

Please Support Our J.S. Bach Mission, Even with a Purchase in an Other Seller's Store 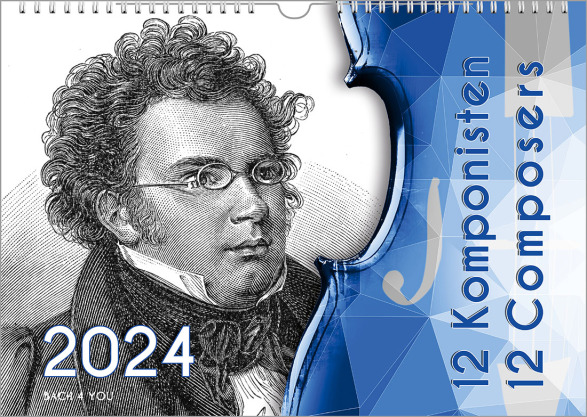