In fact, there is a Luther calendar, a Beethoven calendar and a Mozart calendar in a publishing house that actually, but only actually, deals exclusively with Johann Sebastian Bach. And yes, you are right, there are also the composers calendars with the colleagues of the musician from Eisenach, Thuringia, Germany and the many general music calendars have nothing to do with the Thomas Cantor. Finally the wine calendars ... it is probably better to start the page about the Luther calendar, the Mozart calendar and the Beethoven calendar again and completely different. So ...

Since 2022 there are two more composers calendars in the Publishing House "Bach 4 You". These are the Beethoven calendar and the Mozart calendar. And then, since 2023, there is also the Luther calendar, for which we puzzled for a long time how you could probably find it best. So ... with which spelling (... only in German). Luther-Kalender with hyphen or in one word, then just Lutherkalender. Well, you are already convinced that you would like to inform yourself more intensively, more compactly than on this page, in order to buy one of the calendars then? Just a Luther calendar, a Mozart calendar or a Beethoven calendar? Then click here to visit the store. Scroll a little bit below the music calendars on that page. In the fourth and fifth offer line. There they are. 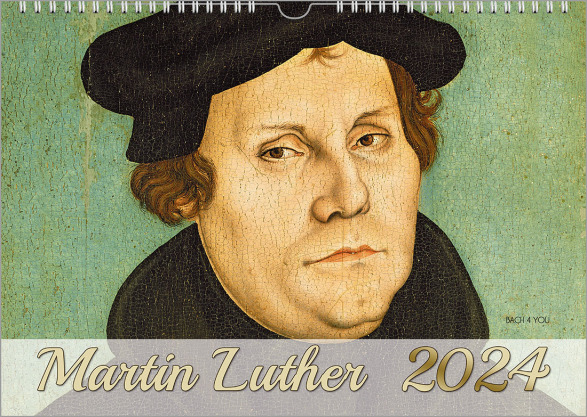 The 2023 + 2024 Luther Calendar. It is not only the youngest calendar in the publishing house, but the very youngest. Of course, it is also available in three sizes and two styles.

Well, at the beginning of our common mission, which consists of the "Bach on Bach" project of my husband Peter and my Publishing House "Bach 4 You", we wanted, so more precisely he, my husband, wanted to create exactly 99 music calendars, in order to also finance the expenses for his research. The topic "Bach" was obvious and because there were so many current works of art with the different composers – yes also from Mozart and also from Beethoven – the composers calendars also came into being. Always twelve masters in one calendar. The idea of also creating a Mozart calendar and a Beethoven calendar didn't just exist at all. This was also due to the fact that we had no idea what to add to the content of such a calendar, which honors only one and not twelve masters.

Enough reading, now quickly to the store? Gladly via the button. There you will find all calendars, but please note ... the Mozart calendar on this page – and also the Beethoven calendar and the Luther calendar – is not one of the composers calendars. All three can be found under them. Under the music calendars and the angel calendar. 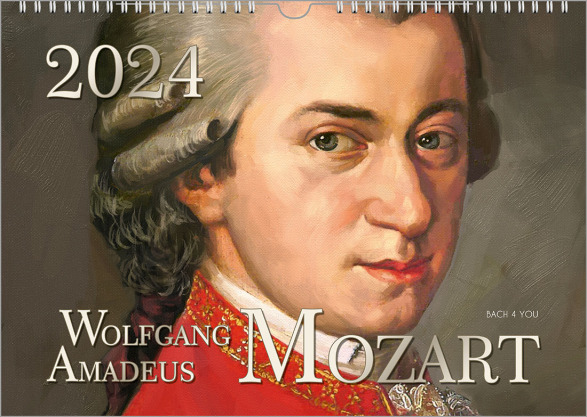 The Mozart calendar is the second youngest calendar in the publishing house. In fact, it was created because we also wanted to "bring to life" the Beethoven calendar. Of course, it is also available in three sizes and two styles.

It was the year 2020 and the world wanted to celebrate the 250th birthday of the musical superstar. Now Beethoven is meant. But Corona made many fans quite a heavy line through the bill. What a special pity! But of course the event did not pass by unnoticed. The Beethoven anniversary was of course a topic. And it initiated the idea of creating a Beethoven calendar. But the challenge still remained: what to put in it, because there was too few of everything. Too few portraits, too few photos of great monuments, too few wood engravings. But ... one third of the content could work. If, yes, if we could get hold of the original wood engravings, because we needed them for high-quality scans. We finally did it. Although there was no excellent photo of one of the monuments, there were more scenes from Beethoven's life, depicted on wood engravings from a distant time. 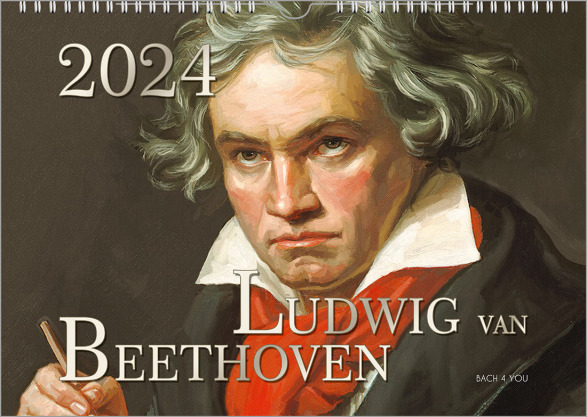 The Beethoven calendar and its cover are decorated with what is certainly the most famous motif of the composer. Of course, it is not the original above, but an excellent new work after the famous origin. Also this calendar ... had you expected something else ... ist released, of course, in 2023 and 2024 and in all the future. And also via "Zazzle" ... so our American friends also get it as a brochure calendar (... then with a grid in the lower half).

Back to the Beethoven calendar, respectively then Mozart calendar and finally the Luther calendar. With our experience, a lot of research and heavy thinking, we found out that there is clearly a "top league" among the experts of historical composition. Fans of Handel will wince. And lovers of Mendelssohn Bartholdy's music, too. Plus those who consider Liszt, Wagner and Schubert their equals. But worldwide, and we think also in Germany, Mozart, Bach and Beethoven are simply the "first league". The ones "on the podium". It can be determined, apart from the degree of popularity in many countries, quite unmusically also by the number of monuments, the associations, in rankings, via mini erasers, the offer of busts and so on, and so on. 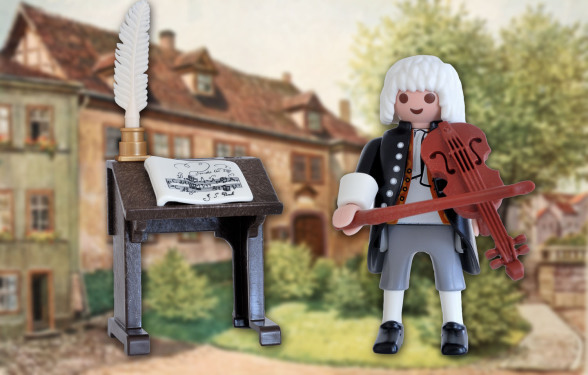 The little Bach man of a well-known toy manufacturer was the indirect reason to put together a Luther calendar. Read in the next section how such a thing could be.

Already in 2017, that is before the Beethoven anniversary, the world celebrated 500 years of the Reformation and thus also 500 years of Martin Luther. To mark this occasion and in his honor, a well-known toy manufacturer published the "Luther Manikin". So at that time there was a Luther manikin and also already a Mozart manikin. But there was no Bach manikin. In recent years, we have often been asked whether there would ever be such a Bach manikin, and a Bach fan even suggested that my publishing house could have one made. True, we could have, but with a minimum order of a few thousand ... that wouldn't have worked financially. Not at all. Absolutely not at all. And so we waited and hoped. For a long time in vain. But then came the 333rd birthday of Johann Sebastian and with it came the desired Bach manikin.

Of course, the publisher ordered some and you can now also buy this Bach manikin from the publisher. In the course of this consideration, namely whether Bach fans could be enthusiastic about such an offer, the way led past the Luther manikin. Astonishing was finally the fact that this Luther manikin was the most requested of all manikins ever. And this fact led us to think whether there are so many Luther fans that a Luther calendar would have a good chance of success. And we thought ... yes, that could be.

The challenge remained, now for the third time, that is after the "filling" of the Mozart calendar and the Beethoven calendar, whether there were also enough motifs available for such a Luther calendar. It should be mentioned in passing that of course twelve portraits in a calendar would have been boring and that also applies to twelve Luther monuments. A challenge especially for a calendar about Martin Luther was also that we didn't want to include too cool portraits of "newer design". Then we were also not sure – Luther is not "our topic and core competence" – whether there were enough great and different wood engraving motifs.

Postage stamps were then still an option, but some of them – those from Europe and mainly from Germany – were too ugly. On the other hand, the ones from Africa and the Caribbean as well as Arabia were cool, but firstly too colorful and secondly Martin Luther had little to do with the three world regions mentioned. A single stamp met the "minimum requirement" and we bought it, only to discard its inclusion in the calendar even before it was printed. Because in the meantime we had found enough historical portraits and also monuments on dreamlike photos as well as finally the scenes from his life of which we managed to buy the respective wood engravings.