Bach Music Complete Edition, Gesamtwerk, Gesamtausgabe: What Would Be a Website About Bach Without His Music?!

The Bach Complete Edition and the Bach Complete Works: Two different animals. Sounds like it is the same? Absolutely. However: Just by definition the Bach science decided one term is this, the very similar term is something different. Complicated? Complicated indeed. Read about that strange phenomenon later on this page.

You actually didn't want to read complicating text here and now and you didn't want to "dive" deeper into the matter ... but you wanted to buy Bachs music and for that reason you wanted to get more information. That is possible here with a click to the shop "Bach 4 You".

That actually would not be possible: A website in the matter of Johann Sebastian Bach, and we would not help how and where to find to the master's music? And if that is possible at all, without any complications and at a reasonable price.

A reasonable price is, what the publishing house "Bach 4 You" cannot offer. Actually, the price for the whole edition in the "Bach 4 You "Shop" is unreal. Unbelievable value priced! It's unbelievable exciting, and the Bach works is unbelievably complete. Why actually is the Renate Bach Publishing House doing this? Because both "Bach 4 You", and the author of the non-commercial "Bach on Bach" portal, which this website is part of, have three goals:

1. The common mission of publishing house and author wants to guide you fast to answers regarding your questions on your search in the subject of Bach. For instance, that is possible with the FAQ on "Bach on Bach".

2. Author and publishing house want to spread the knowledge about Bach even broader and more actively and intensive in the whole world plus invite a bigger audience to Bach's exceptionally gift music and finally ...

3. The author and publishing house of course want to refinance their expenses for the whole project, mainly for trips in the matter of Bach and the Johann Sebastian Bach genealogy. That is, why the publishing house can make the following offer.

It's not Just the Bach Music Complete Edition for that Low Price, but There Are Also 10 Additional Precious Bach Gifts for You!

A probably absolutely unbeatable offer of music plus eight free valuable add-ons. Add-on no. 1 is all the music sheets with Bach's music, that is the "Old Bach Gesamtausgabe": That is 16,800 music sheets that you get as a pdf file in addition to the music work, the Bach Complete Edition of music. Plus, you can look forward to another seven add-ons, which together represent quite a considerable value. There is the Biography About Bach for Chirlden as an audio book and as an eBook, for your tablet and for your smartphone. But the Biography on Bach for kids are just three more of the add-ons. You can find out more in the store, but you can already explore it in the image above. This complete work of music costs € 139 *. What does the asterisk mean? It means VAT included, plus shipping costs.  --

One Bach shop with almost countless Bach gifts? No, there is Zazzle and three Bach shops more. The Bach shop with Bach music? It is the publisher's shop (... left button) ... or learn more about the Bach mission and the five stores.  -- 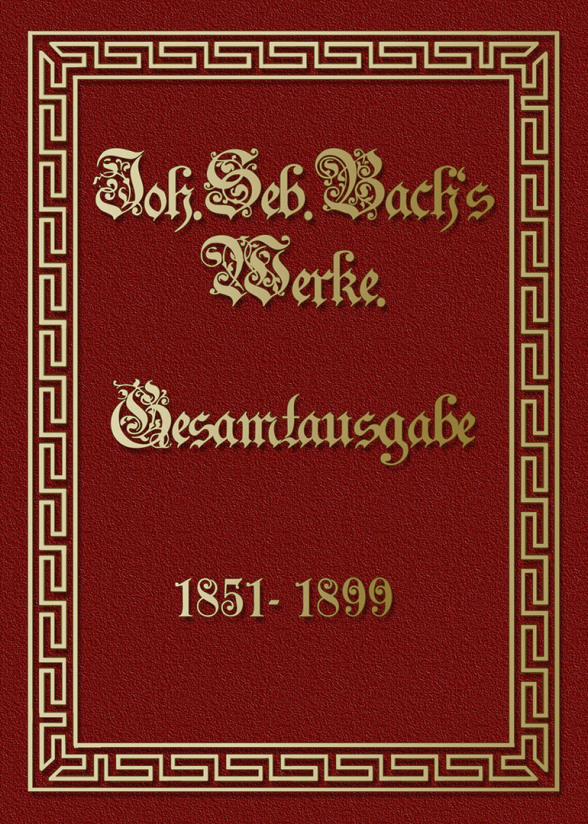 Not everywhere is inside, what's offered on the outside. You better sit down now: You read Bach and works. However, what you see in the picture is the so called "Alte Bach Gesamtausgabe", which is the "Old Bach Complete Edition". You think "Bach Gesamtausgabe and Bach Gesamtwerk" is the same, that is to say "Bach Music Works" and "Bach Complete Edition" is the same? Well, it just isn't. Experts, scientists in the matter of Bach and the book industry decided: Bach-Werk is the Music and Bach-Gesamtausgabe are the music sheets, which would be "Bach Complete Edition" is the music you can listen to and "Bach Music Works" are the music sheets, which you can read "only". So to speak, the definition is close and really not that easy, in particular, when it comes to translate that stuff in English. It's already confusing in German and that is why you find Bach's music with only 30 % results, if you decide to google the wrong of both terms. As the music industry deals with that fact and assumes, you are looking for Bach's music, not for the music sheets, when you are googling. However, not all sellers do so, so you get not all offers on the market. To the shop.

Bach-Gesamtausgaben: The "Old", the "New" and the "New Revised"

Okay, one hint: The music of Bach is called the Bach Complete Edition in English, Bach's music sheets have no special term, so it's almost impossible to find them on Google. Read about the Bach Gesamtausgabe – which is the collection of music sheets – in the oncoming paragraph.

You are on the right track. However, now there are three Bach Gesamtausgabens (... Germans might apologize the plural as the plural of a foreign word always follows the grammar of the destination language, I am kidding but serious). There is the "Old Bach Gesamtausgabe" the "New Bach Gesamtausgabe" and the "Revised New Bach Gesamtausgabe. The Old Bach Gesamtausgabe was published by the Breitkopf and Härtel Publishing House in a cooperation with the Bach Society in Leipzig, Saxony, Germany over a period of almost half a century, and that means the first volume was released in 1851 and the last volume in 1899. It's a total of 16,800 pages, and you can only buy them as pdf files. However, they are in the public domain, that is to say, those who has them, may do with them, what he or she wants. He – or she – is allowed to sell them. Or you can hand it as a gift. Files, paper, although the word "Werke" which is works is on the cover. One exception comes with copyright. If somebody has scanned all 16,800 music sheets or has taken photos from it, it's a new work in the sense of copyrights, and you can not download it somewhere or get it from a CD and do with it, what you want.

Starting in 1954 until 2007 – that is now over a half century ago – the "New Bach Gesamtausgabe" came into being: It's the music sheets again, of course gussied on a scientific basis. The funny thing: The last volume of the edition from 1954 until 2007 was published as late as 2016. This New Bach Gesamtausgabe is released in the Bärenreiter Publishing Company in Kassel. The purchase costs in 2016 were – as a subscription offer – as high as some € 16,000. Starting in 2017 you can buy the whole works for € 20.000. Whether it's tender € 16,000 or cool € 20,000 is what you should ask in the publishing house or at the bookstore you trust and it's all about whether you order, before they printed the final volume ... or after.

Today, there finally – in the Bärenreiter Publishing House, too – is a next edition in preparation: The New Revised Bach Gesamtausgabe, again the music sheets. Today from this edition just three volumes are existing, the purchase price is € 600. The release of the final volume is planned in 2065. So, it's plus or minus one decade ... or so.

Why do they do that? Well, the state of science is changing. There's a work that's been classified as composed by Bach. In another one you think you have found out that it was not Bach who wrote it, but another composer. And then, of course, you need a completely new Complete Works of Bach. But ... those who are working on it would certainly be bowing with stomach ache right now. Or simply weep over my words.

So, it goes on with Johann Sebastian's music: Bach Gesamtwerk is not like Bach Gesamtwerk and Bach complete edition is not like Bach complete edition. All boxes with Bach music are similar and they look similar. There almost is the same content in all boxes, too. It's CDs in sleeves (... slipcases from cardboard). Whether it's 155 CDs, 152 CDs or 142 CDs ... in no edition one of Bach superb works disappeared. In 2014 as well none is missing. Ic you next realize, that the "whole Bach works" in one box does not mean, it's all what this particular musician played from Bach – so not the complete work of the master – you quickly realize, when a bargain is no bargain. Do you need a guide through the offer? "Bach 4 You" specializes. 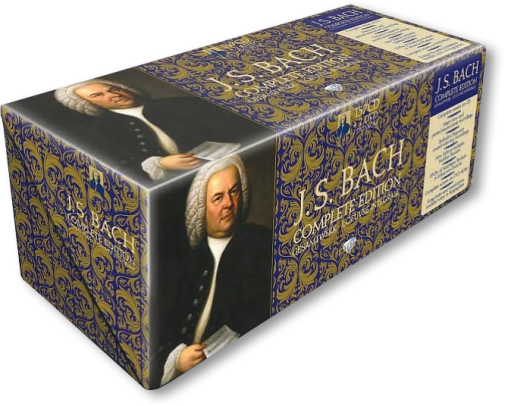 What is that? It is the same offer as in the ensemble earlier on this page ... the super collection of the music label Brilliant Classic, however it's one generation older. There's no additional difference. The different number of data carriers, CDs, mirrors a better arrangement of the titles in the youngest collection. Promise: Not a single work in the actual Bach Gesamtwerk, the actual Bach Complete Edition is missing. Meanwhile, the title off this latest edition changed a little, too. Plus it sold from (... I am not kidding) € 1.435 until € 119 plus two gifts come in this package ... by "Bach 4 You". So, if you are looking for the Bach Gesamtwerk, which is again the Bach Music Complete Edition, you realize: Don't spend too much money ... is really getting tough.

It's true: You don't have to decide for the Bach biography for children, if you buy the Bach Gesamtwerk, the Bach Complete Edition of 142 CDs and get the Bach Gesamtausgabe, the 16,800 music sheets for free. If you are no child anymore, you might like the Bach Medley very much, it's the collection of narrated tributes, which come with Bach's music and a small 8 minutes long biography. Or you decide for the necrology on Bach. Or the coloring book is perfect for you. Maybe the Bach Kindergarten game is perfect. Or you invite Bach for 12 months on a wall in your home and decide for a calendar. Maybe a gift certificate, and you don't have to decide right now. It's that simple at "Bach 4 You", when you order the music complete edition on 142 CDs. Here you can discover all gifts, of which you can decide for one. Just the "Old Gesamtausgabe": Instead of this one we are not able to offer you the "New Bach Gesamtausgabe", sorry about that, but you probably understand, why. Here you get to the shop again.

For musicians for the next Christmas or birthday … learn more. 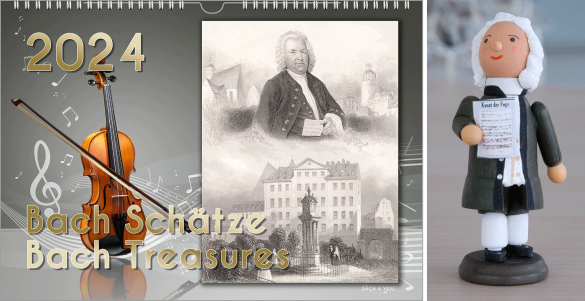